From the immediate family of the 1987 English & Irish 2000 Guineas winner, Don't Forget Me, and which family was introduced into our Yard by Bernard Mills, Royal Alchemist was bought as a foal in 2002 to be trained at Saxon House; she progressed into one of the best eight and ten furlong racemares in Europe as a four year old in 2006; you can see her here, winning first time out, at Nottingham in May 2004.

If you go here you can see the Mare winning the Listed Snowdrop Stakes at Kempton in April 2006.

Here you can see her just being touched off in the Group Three Dahila Stakes at Newmarket the following month.

And here she is finishing third, under the late Pat Smullen, in the Group Two Ridgewood Pearl Stakes at the Curragh, also in May 2006; the Yard always felt that she would have won at the Curragh if the ground had not been commensurate with what is normally seen at Thurles in the first half of February.

Here is the Mare finishing third in the 2006 Windsor Forest Stakes at Royal Ascot.

Sold out of Saxon House in the Summer of 2006 she was bought back by Rowdown in the Autumn of 2018; her last foal, by the French Derby and Prix Jean Prat winner and highly successful sire, Lawman, was born in April 2019 and is a full brother to the 93 rated Newton's Law; and a half brother to the Mare's 2017 filly by Make Believe, Faire Croire, who is currently rated 93, a winner and a filly who was beaten just under three lengths in Naas Listed race in August 2020.

She will be trained at Rowdown with a long term view of going to stud and, at least initially, being covered by a stallion from the Northern Dancer line.

Here she is getting the hang of things in the second week of November. And here she is having a chat with Bertie: 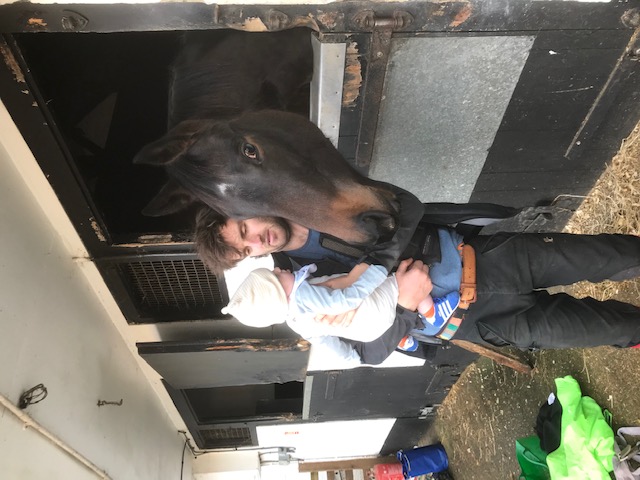 And a week later here she is walking under saddle for the first time.