Misu Pete and Mezmaar at Kempton This Evening 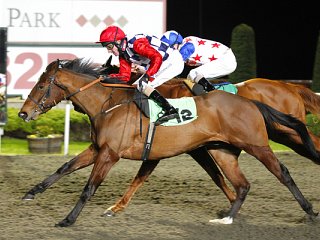 The Yard is pleased to be back in action at Kempton this evening; Misu Pete is going into unknown territory by running over a mile but he has won at Kempton (as shown in the photo!!) and is decently well in at the weights; truth to tell he has not been particularly consistent over the Winter but he has the ability to be highly competitive off this evening’s mark and quite a bit will hinge on how he finds the mile.

We are also pleased that Mezmaar is making his debut for Rowdown; he is a very strong person both on the gallops and on the racecourse; we have been trying to teach him to settle so he has not done quite as much work as he normally would and this evening a key aim is to get him to relax into the race; we are confident that he will improve significantly from what he achieves this evening and hope to have him back on the track in perhaps three weeks’ time. He was rated 97 in the Summer of 2014 and the form book and what he has shown at Rowdown make him a horse to look forward to in the Summer.