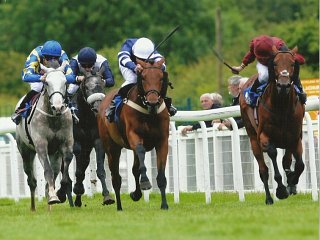 Today we take Marmajuke Bay to York for their quite valuable twelve furlong Handicap, the last race on the opening day of the Dante Meeting; we are also looking to take one our early two year olds, Dolly Dagger, to the Knavesmire on Friday for one of the first two year old Pattern races of the Season, the Listed Marygate Stakes.

Marmajuke Bay has been a steadily progressive horse since the Autumn of 2015, winning last Season’s Bibury Cup on the way, and easy ground at York will suit him a whole lot better than his last run round the bends of Dunstall Park; in terms of race planning the weather has been difficult to predict and initially the perception was that the York ground might be too firm for him but the rain has come and it will certainly be easy enough today; given the amount of rain in today’s forecast we hope that it will not descend into a bog (the Knavesmire does not have ‘mire’ in the name for nothing!!) and really heavy ground would not particularly suit him as it doesn’t many good actioned horses; but it is the right race for him at the right time and Yard are sending him to Yorkshire to run well.