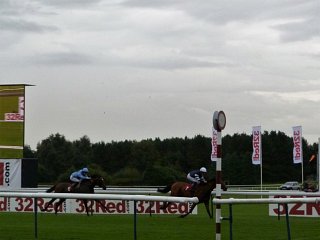 Dropping back to twelve furlongs at his favourite Haydock, produced a spiffing performance from Marmajuke Bay yesterday afternoon; if you follow this link you can see a video of his performance and the photo shows him getting well ontop in the last half furlong and turning away some quality opposition. He has now won three times and finished third from four starts at the Lancashire track.

At Salisbury Rainbow Jazz also ran well in a race where, for him at least, things did not go as smoothly after a slow start getting held up in behind horses under the far rail before staying on progressively throughout the final quarter of the race; he is from the family of the Group Three two mile winner Rainbow High (who by the by has been a successful Pointing sire in the West Country) and he might well be of some interest in similar Nurseries over the Autumn possibly over further than seven furlongs.

This evening we take another terrific servant, the winner of nine races, of both Saxon House and Rowdown, Spice Fair, to Kempton. At the age of ten it would be true to say that he will be operating in staying hurdles over the coming Winter (although he still retains sufficient pace to have got in the frame of the last two Imperial Cups!); he has run decently in both his starts this Summer, at Ffos Las, and the handicapper has finally taken account that he might not be quite as young as he once was and he is now a stone easier than he was a year ago; he should be competitive this evening and some nice hurdle races beckon over the Winter.