Bayston Hill at Lingfield This Afternoon 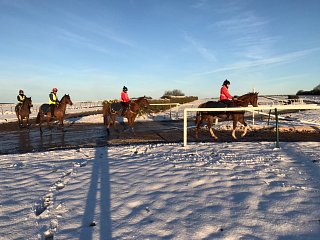 We would like to think that Bayston Hill has a lot going for him at Lingfield this pm; a decent draw for the first time on the AW this year, his optimum trip, weighted to turn things round with Music Major from a fortnight ago even without Nicola’s seven pounds all on a track that both suits him and on which he acts; he should be highly competitive.

At Chelmsford tomorrow evening Little Aub will look to build on the quiet promise he showed at Kempton a fortnight ago and take the second step towards a mark and our grand servant, Black Truffle, who it is probably true to say is nearer the end of his career on the track than the beginning, will look to get a just reward for the consistency he has shown throughout the second half of the Summer and the Autumn; barring the one run on unsuitably fast ground at Brighton he hasn’t been out of the frame since the beginning of June.

Finally some good news, albeit something that has been a long time coming. From the beginning of January the revised Racing Prize Money structure kicks in. One example being at Wolverhampton on Wednesday the 3rd where the lowest class race is the Class Six Apprentice Handicap with a range of 46 to 55; the race value exceeds £6k, more than £3k to the Winner and prizemoney, £300, down to 8th.There are similar enhancements across both the Flat and NH programmes; I don’t say it lightly but well done the BHA.

And the photo shows the string coming off the Downs yesterday morning; early in the Year, at least over recent Winters, to have such wintery conditions; not so easy to work in but a healthy environment for the horses.