Bird for Life at Lingfield & Waqaas at Kempton 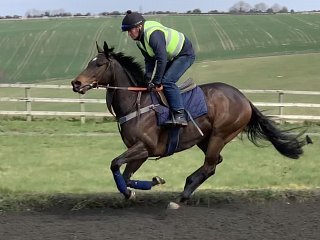 We were pleased to see Bayston Hill run a fair bit better yesterday; in a slowly run race he kept on nicely to be third and he should both continue to be competitive and give his loyal Owners a lot of interest over the Spring and Summer.

Bird for Life goes back to Lingfield for her fourth run on the Surrey polytrack this afternoon; she has developed into something of a Kempton specialist but she does go effectively on the left handed Lingfield version of the polytrack witness finishing a close up (and progressively closing) fifth in a similar race under Ellie in the middle of February; the constraint this pm is the combination of the widest of wide draws and the maximum field which will mean her and Ellie will need to avoid traffic as she looks to improve on the long bend; a lot will depend on how the race is actually run but with a trouble free passage she might not be far away this afternoon.

We are pleased to introduce Waqaas to the racecourse for the first time for Rowdown in the last race at Kempton, their quite valuable six furlong Handicap. He has been bought back by his breeders, having originally been a £180k yearling when purchased by Shadwell; he went someway to justifying that price tag when running well to be fourth in the Richmond Stakes as a two year old but since then has not been a particuarly easy horse to train for both Charlie Hills and for Jamie Osborne. As befits a person who cost that sort of dosh he is a spiffing specimem with a quality action, witness the photo above of him working on Saturday morning as part of his prep for this evening, and he should be really compeitive in decent sprint handicaps on a sound surface going forward; he will come on for what he achieves this evening and we are looking forward to seeing him translate his intrinsic quality into success on the track.