Bred by Janet Gawthorpe Dylan's Sea Song is a rangy NH Mare and is a half sister to two multiple middle distance winners, Jamaica Grande and Elsie Bay. If you follow this link you can see her working at the end of December 2018 as she approached her first run in a NH Flat Race in January 2019; and here she is a fortnight later working with Arlcchino's Arc and Born to Please immediately prior to her first run.

She ran for the first time in a NH Flat at Newbury at the beginning of January, closing in behind the leading pack at the cross fence before finding the lack of race sharpness against her up the straight; returning to Newbury seven weeks later she showed marked improvement (and showed herself to be a promising NH racemare) to be a running on second in a similar race on easier ground, which you can see here.

After a Summer at grass she ran in three good quality Newbury Novice Hurdles in December and January running a similar race each time and showing more than enough against decent opposition to suggest that she will be competitive in Novice Handicap Hurdles.

She made her reappearance following the resumption in a sixteen furlong Handicap Hurdle at Stratford in the first week of August; and, on better ground than that she ran on in her Novice races, she put up an improved performance to be a running on second and would have been closer but for getting held up on the turn in; you can see a video of the race by following this link.

Still on better ground she put up a fine display to win a Southwell Mare's Handicap Hurdle, deservedly getting off the mark, in the middle of November; you can see a video of this race here.

Three runs later and off a reasonable mark he powered home in a sixteen furlong Handicap Hurdle at Huntingdon on May Bank Holiday Monday; here he is with James Davies and our hard working Travelling Lad, Dave, in the Winner's Enclosure: 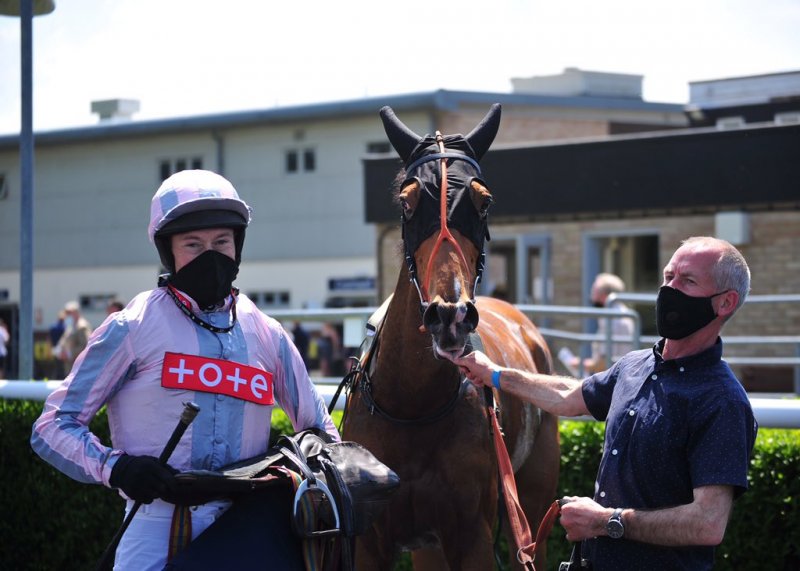