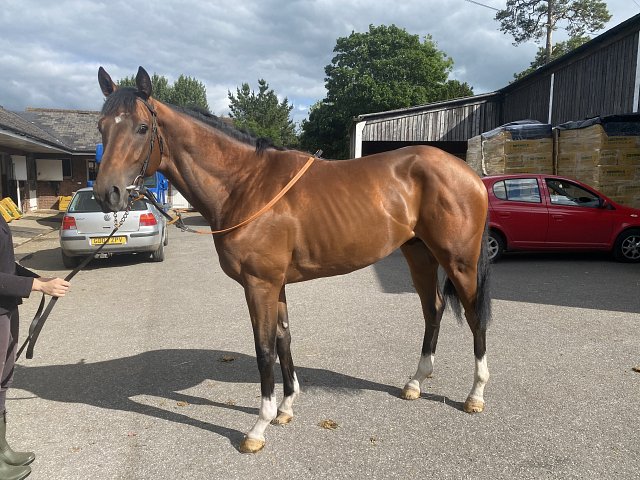 By the Duel Group Two winning Kodiac stallion, Adaay, out of a winning Barathea Mare from the high class Ballymacoll Stud family of Hellenic and Islington and who was placed in the Group Two Park Hill Stakes (de facto the Fillies St Leger), Mark bought this nicely proportioned colt for his kind Owners at Tattersalls in October 2020.

Here he is, on the 16th November, getting the hang of things walking behind Timeforaspin.

We put him on the track, in a six furlong Newbury Novice Stake, in the middle of May 2021; and he had two further runs in Maiden company, over seven furlongs at Chelmsford and over six at Windsor; he will improve with time and he is a horse who could be really effective in Nurseries as we get into the Summer. And this proved to be the case in his first start in Handicap company he was just caught close home by a horse rated 17lbs his inferior in a competitive seven furlong Nursery at Kempton in the second week of August.

After two further runs in Handicaps in the Autumn of 2021, nether of which were quite as good as his first, we gelded him; and he returned to form with an excellent performance to be second, just touched off in the final 50 yards, of a competitive Kempton eight furlong Handicap in the first week of January 2022; he should continue to give a decent account of himself in Handicap company over the coming Summer; and we were delighted that he got off the mark in really game fashion at Lingfield at the end of February.